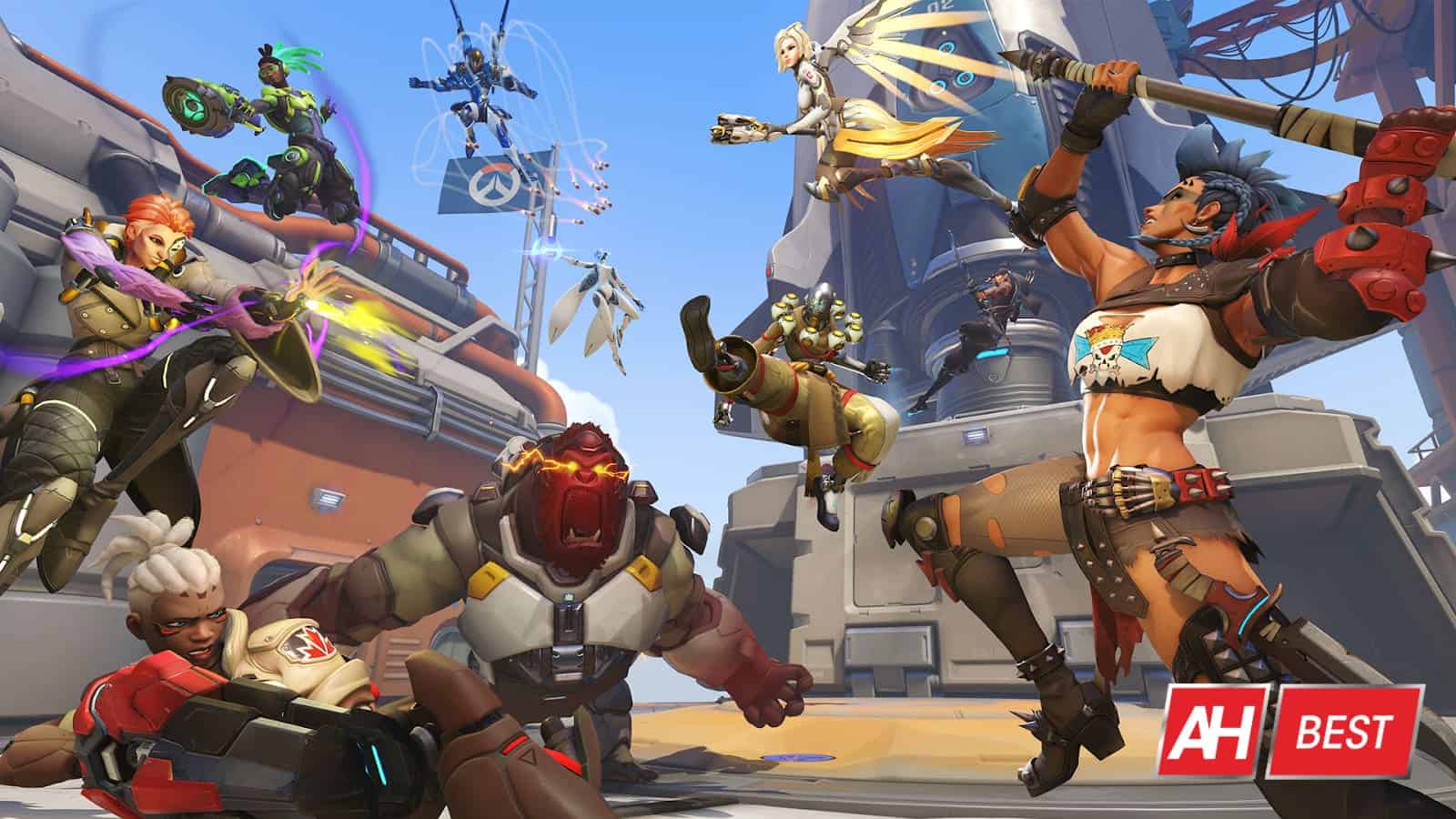 The PS5 and Xbox Series X have some excellent games available at good prices, but some of the best ones are free.

The free ones worth your time may also be familiar to you. As they’re pretty popular. Then again maybe you’ve never actually touched any free games on your console. But you shouldn’t immediately dismiss them as they are pretty good if given a chance. Most of the free games in this list will be available for both the PS5 and the Xbox Series X. However, there may be one or two that are exclusive to one console or the other.

With that said, there are more than enough games on here to satisfy both camps of console users.

The best free games for your PS5 & Xbox Series X

Most of the games below should be available on both consoles. As noted though, that’s with an exception of one or two games. There are quite a few more free games on PS5 and Xbox Series X as well, but we found these to be the top-tier options worth checking out first.

Think about Dauntless as a free-to-play version of Monster Hunter. Your main goal is to hunt down giant beasts in the game called Behemoths, and you can party with up to four people in your own group.

The cool thing about this game is it’s not really focused on PvP or battle royale style gameplay. Instead, you group up with other players to take down those big monsters.

It’s co-op style gameplay with a lot to offer. Including character customization with options for weapons and all the pieces that make up your gear loadout. There’s already a large amount of Behemoths in the game since it’s been out for more than a year now. But new content patches continue to come out which promise to add even more Behemoths to hunt.

This is a multiplayer battle royale game so expect similar gameplay to that of Fortnite, which is also on this list, but the cool thing is that each character has their own unique set of abilities. Including an ultimate of sorts which can help turn the tides of battle.

Battle it out against large groups of other players, trying to be the last team standing. Maps are sprawling areas with all kinds of loot and things to discover, so make sure you run around and explore from time to time. You never know what you might stumble upon.

Also worth noting is that you can play either solo or in groups. So if you’d rather team up with friends, you can do so.

One of the most well-known and most popular battle royale games is Fortnite. And it’s one of the free games you can play on PS5 and Xbox Series X. What’s more is that the next-gen versions of the game have been updated to include support for the next-gen console upgrades. Like better frames per second.

Fortnite, as a battle royale is like, well really any other battle royale. You try to be the last team or person standing on a large map that constantly has a shrinking play area. But it throws some unique features into the mix. Like the capability to harvest materials and craft things on the fly in-game. Such as a wall to protect you from bullet fire or a sniper perch to take out enemies from afar.

It also features other play modes that mix up the gameplay a bit from the standard mode that most people play. And it has one heck of a list of customization options. From emotes to character outfits and more.

Warframe is the first MMO-style game on this list, and what a doozy of an MMO it is. Unlike traditional MMOs, Warframe is a third-person action shooter (and some melee combat), with MMO-style features. Not too unlike Destiny 2.

There’s dungeons and raids, multiplayer PvE and PvP content and a whole lot of character customization with the different warframes you can acquire and use. Not to mention the plethora of different weapons at your disposal.

In the game you play as space ninjas called Tennos. You can traverse across procedurally generated maps to explore and discover a ton of different stuff. And while you can play through the campaign and some of the content within it as a solo player, some content will need or at the very least be better if you have a group.

Lastly, Warframe has some nice upgrades on next-gen consoles. So if you want something visually pleasing to check out, Warframe is one of the free games on PS5 and Xbox Series X worth your time.

If you’ve never heard of Rocket League before now is a great time to check it out. It’s essentially soccer but with cars. Which adds an element of challenge to the gameplay as you strive to score goals while behind the wheel of any number of varying vehicle options.

Rocket League is also one of those free games that’s cross-platform, which means you can play on PS5 and your friends can play on Xbox Series X or PC.

As games go this is a slightly strange combination of game types, but it’s also a refreshing style of gameplay that has hooked many players. If you’re looking for something fun and a little more out there, consider giving Rocket League a try.

Genshin Impact is one of the best if not the best free game on console. The only downside is that it’s not available on Xbox. Which means you’ll need a PS4 or a PS5 to play it.

If you do have one of those consoles, definitely check it out. Genshin Impact is best described as a Breath of the Wild clone, though it definitely stands on its own two feet and is an excellent game. It’s a single player RPG for the most part but there is multiplayer capabilities there to mess around with after you get to a certain level. There’s also crafting, hundreds of quests to complete, and even a fair amount of end-game content.

There is a very wide open world to explore and a huge roster of playable characters too. Each character also has different attacks, and there are multiple weapon groups. As free games for the PS5 go, you can’t go wrong with Genshin Impact. And if you like RPGs, definitely look into this one.

Paladins is a lot like Overwatch, but free, so if you like games like Overwatch this is one to check out. Paladins is a team-based shooter that pairs you up against the enemy team, much like any other shooter, and there are a mix of goals or tasks you must complete throughout the match.

There are multiple maps to play on and a variety of ways to find a play style that fits you personally. Each character in the game has one weapon unique to them, much like Overwatch. But they also have unique abilities that go along with that and loadout cards to help fine tune your play style even further.

With a decent roster of champions and multiple game modes to play, including Onslaught, Competitive Ranked, Siege, King Of The Hill, and Team Deathmatch, you won’t be getting bored of Paladins any time soon.

If you liked Overwatch, you should love Overwatch 2. Especially since you can play it on both Xbox Series X|S and PS5.

Warzone 2.0 is finally here now that Call Of Duty: Modern Warfare II has launched, and it brings with it the all-new Al Mazrah map which is even larger than Verdansk. Naturally, there’s new weapons, new operators, and new killstreaks and all kinds of other new gear. Warzone is bigger than ever with version 2.0, and it’s definitely worth diving in if you enjoy battle royale titles.

While Warzone 2.0 is free, there are definitely some benefits to having Modern Warfare II. For instance, certain weapon unlocks will be easier.

Warface is a first-person shooter through and through. You’ll find that it’s pretty similar in gameplay to larger franchises like Call Of Duty, and because it’s free-to-play it’s a nice alternative if you’re looking for a multiplayer FPS that isn’t a battle royale.

It features pretty decent graphics and a wide variety of unlockable weapons to unleash on your enemies. There’s also multiple playable classes, multiple game mode types, and even co-operative and competitive play mores that feature missions with a more story-driven approach.

It may not be on the same level as Call Of Duty, but it’s certainly is a great free FPS game to hold you over until you get Call Of Duty. Or if you just need a break from it.

Bless Unleashed is a full-scale traditional MMO with thousands of quests, a range of different classes and races to play, with everything you’d expect from an MMO including leveling and unlocking skills as part of your character progressions, dungeons, raids, crafting, and a whole lot more.

For most of this year Bless Unleashed was exclusive to Xbox and PC. But it has finally made the jump to PlayStation which means if you have a PS5 you can experience what this game is all about. Of course it’s also playable on PS4 so if you’re still using the current-gen console, you won’t be left out.

There are five different classes to choose from, each providing a different enough combat experience that it’s worth trying them all out briefly to find one you like the best.

Destiny 2 is right up there with the best of the best free games on PS5 and Xbox Series X. While not all of the content in Destiny 2 is free-to-play, there is a fair amount of content for free players, known as New Light players within the Destiny universe.

This includes much of the campaign quests from earlier expansions and seasons. Though some stuff has now been vaulted so it won’t include everything the game used to have. You can also play in multiplayer PvP content if you feel like something more competitive. Each season within the game tends to include some stuff for free players too. Like The Dawning, which is the current event happening right now within the game.

It’s worth reiterating that while Destiny 2 is now free to play, the current expansion is not and there is still quite a bit of new stuff that you will need the expansion and the season pass for. So to get the full experience of Destiny 2 with everything it has to offer, you will need to spend some money. But it is worth it. Especially with the update for console players that gives Destiny 2 all the next-gen upgrades.

Path of Exile is probably the closest game to Diablo in regards to both gameplay style and quality of the content. It’s an isometric action RPG that is all about the loot.

With hundreds of hours of gameplay content being available thanks to the large campaign and collection of end-game content that you have to go through. You’ll have a ton of different single play content to experience. But the game also has a lot of online multiplayer content that’s worth doing.

You’ll need a PlayStation Plus subscription to access the online content though. So keep that in mind. If you like action RPG games where you hack and slash your way through countless hordes of enemies, this game is for you.

Listen, if you like brawlers, then you absolutely need to be playing MultiVersus. From Batman to Bugs Bunny, to Morty from Rick and Morty, there’s no shortage of playable characters to take on your friends. The game even has Shaggy is in his Ultra Instinct form. As a free-to-play game, MultiVersus is a fun brawler with tons of content. But it’s even better because the game is really good.

There’s multiple modes of play, it’s cross-platform, and quite a bit of customization.