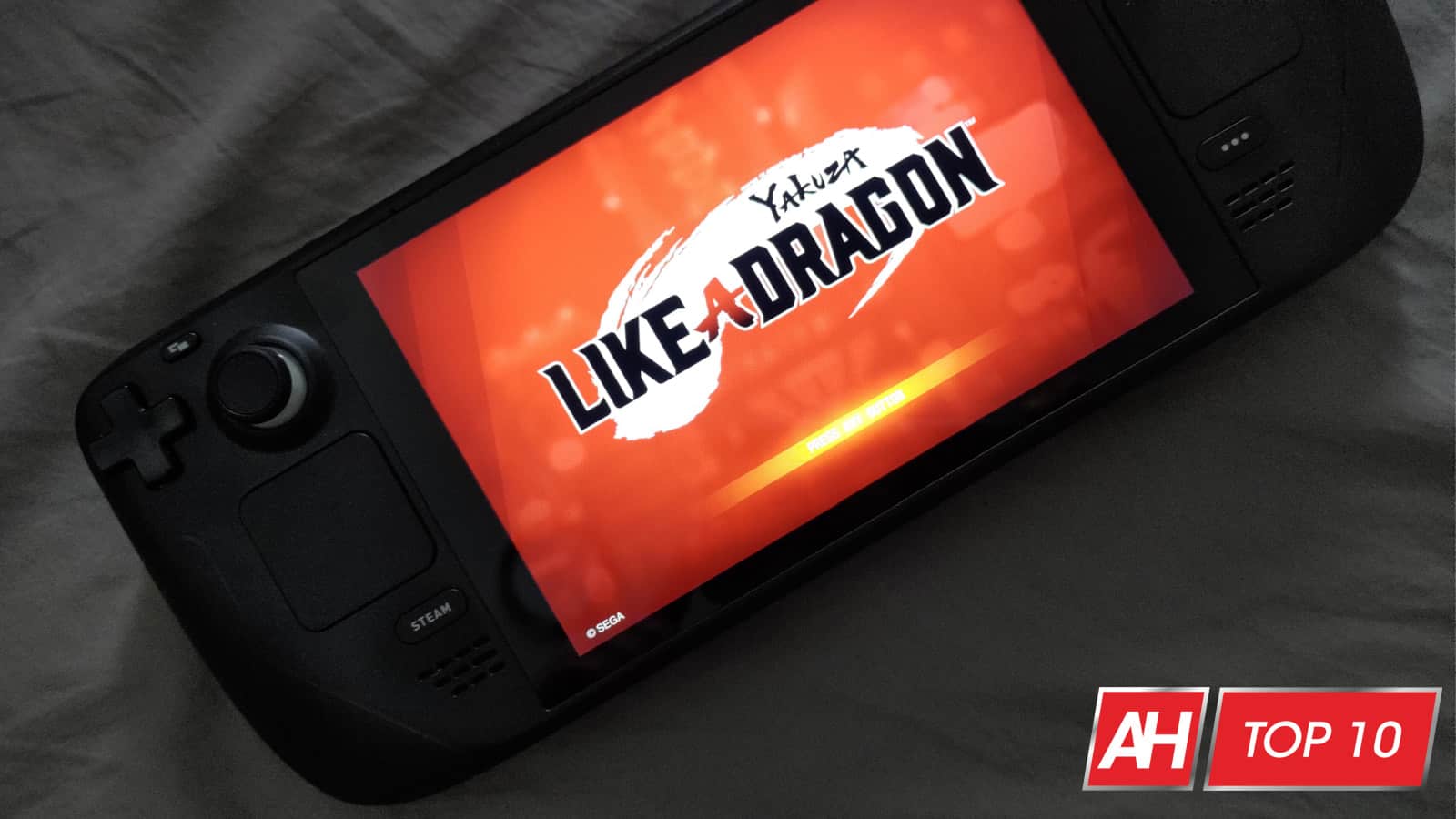 The collection of games that work with the Steam Deck is continuously growing, from RPG titles to action to adventure, and we wanted to highlight some of the best ones to check out. While we already have a list of the best games for Steam Deck in general (you can check that out here), this list will focus on the best RPG games for the Steam Deck.

For the most part we’ll try to keep the list of best RPG games for the Steam Deck to titles that are Verified on Deck. Which means games that have been tested by Valve and have received the ever-important stamp of approval. That being said, even games without this badge will still work. Not all of them, but some of them. In fact, don’t be surprised if you stumble upon a game you own that works just fine even without verified badge. You probably own more than you think if you have a big library.

Without further ado, here’s our list of the best games in the role-playing genre that you can pick up and play on the Steam Deck.

The Best RPG Games For The Steam Deck

The Witcher 3 is perhaps one of the most renowned games in the last 10 years. As a massive open-world RPG, there’s lots to explore and much and more to do. With quests aplenty and two expansion DLCs, the world of The Witcher 3 gives you what feels like endless hours of content to play through.

This makes it a great games in general, but a wonderful game for the Steam Deck too. Because it could be the only game you own for the handheld and still have something to play days, weeks, or even months down the line. Depending on how quickly you play through games.

In The Witcher 3 you continue your story as Geralt of Rivia, though you will also get to play as Ciri in certain parts of the game. You’ll get to encounter many different locales and towns, meet loads of interesting characters, and discover all kinds of powerful abilities and gear. if you like the Witcher series or just open-world RPG games in general, this is definitely one to grab Especially at its sale price of $7.99 that goes until May 2.

Tunic is a cool little indie RPG that feels a lot like the older Legend Of Zelda games. With some interesting elements that give it a souls-like style. Expect to get lost along the way as you explore dungeons and try to solve puzzles that will allow you to progress further into the game and into new areas.

Expect to be met with challenges and difficult bosses that will no doubt give you a hard time. But trust us when we say that if you stick with it, you will love the game. It’s a wonderful hidden gem that although already gaining popularity, no doubt goes unnoticed by many players still.

While the Yakuza Remastered Collection is definitely a string of games worth picking up, the most recent game in the series, Yakuza: Like A Dragon, is a game you shouldn’t miss either.

This latest installment follows a different main character throughout the length of the game. As opposed to the series’ familiar and much-loved Kazuma Kiryu. The game doesn’t just swap out the lead character, either.

Combat also takes a different turn and is less action-based than before. But still wildly fun and entertaining as ever. Since this game brings in a new lead character, this is also a good starting point for newcomers to the Yakuza series.

Though if you want to get the full Yakuza feel, you may want to start with one of the earlier games first and get invested in the stories and world that Yakuza has to offer. This is definitely one of the best RPG games on the Steam Deck and one of our personal favorites.

Elden Ring is the latest FromSoftware game coming from Bandai Namco. Which means if you’re up for a brutal challenge then this is the game for you. Those who loved previous FromSoftware games will also want to check it out if they haven’t already done so.

Like those past games, Elden Ring delivers you up to a smattering of difficult boss fights and powerful weapons and armor. Unlike those past games though, Elden Ring takes place in a massive open world environment. Which means you can explore a lot more and doing so is encouraged. Because you never know what you might find. For many, this is easily going to be 2022’s game of the year. And it would be well-deserved. As this is definitely one of the best PC games to play right now.

The Ascent is a brand-new cyberpunk-themed action RPG that just released for PC this morning. You can purchase it for $30, though it is currently on sale for $18 through Steam until April 25. It’s also available as part of Xbox Game Pass and just launched for PS5. It plays a bit like Diablo since it’s an isometric action RPG, but it also feels a lot like a twin stick shooter.

In the game you play as an indent (a worker indentured to the corporations) on the planet Veles. You specifically are an indent for the Ascent Group. The largest corporation on Veles. Suddenly, the Ascent Group shuts down and no one knows what’s happening. So begins your story trying to figure out what’s going on as you simultaneously try to survive. Meanwhile everyone around is vying for power.

You can acquire a ton of loot throughout the game including different weapons, gear and more. There’s also a character creator with a handful of customization options. Best of all is that the game can be played solo, or you can play with friends via online co-op or couch co-op.

Beautiful backgrounds, awesome graphics, super cool weapons and combat all wrapped up into a cyberpunk theme. What’s not to like?

If you’re new to the Tales franchise, then you’re in for a wild ride. Tales Of Arise is the newest title in the series boasting action RPG combat with a lively cast of characters. This is a JRPG, so expect plenty of character progression, along with an in-depth story that’ll have you on the edge of your seat the whole way.

The cool thing about this game is that you get to play as the entire cast of story-rich characters. You choose who you want to start the game as, but you can freely move between the other characters at any time during battles. Having said that, the character you choose dictates some of the story elements down the line. So there’s a reasonable of replay value by going back and doing things with another character in a fresh run.

If you like JRPGs, this has everything about JRPGs that you probably love. Plus the graphics are stylish and at times breathtaking.

Final Fantasy XV has certainly been met with its fair share of negative criticisms from fans new and old alike. But that doesn’t change the fact that it’s an amazing game with lots to do. And the Windows Edition is the best version of it since it contains all but one piece of DLC – Episode Ardyn.

This is a fairly sprawling open-world RPG with tons of quests and boss fights, plenty of nostalgic easter eggs and everything from difficult dungeons to chocobo racing.  And to be quite honest, $34.99 for all of the content that you get in this game is a great price. If you like JRPGs and you don’t mind this one having an action-based twist to the combat, you’ll love Final Fantasy XV Windows Edition.

If you grew up with an Xbox or had a friend who did, then you may fondly remember playing the Fable games. Fable Anniversary is a remastered version of the original with loads of extras that make the experience even better. Featuring HD visuals and all of the wonderful times from the original, Fable Anniversary is just like you remember the world of Fable. Where every decision you make has a potentially good or terrible reactionary outcome.

You can play as a hero, or choose to go the evil route and become a horrible player. Both paths have their merits. But you’ll have to figure out which one is the right path for you. Best of all is that if you choose one path you can go back and play the game again to choose the other. And the game will feel totally different because of it.

There’s even a path for traveling somewhere in the middle of good and evil if you like to toe the line. Plus, the Anniversary edition comes with a new Heroic difficulty setting.

Darksiders Genesis plays a lot like The Ascent but also like a Darksiders game. The cool thing about this one is that you finally get to play as Strife, but you also tag-team with War. So you end up playing two of the four horseman throughout the entire game. Much of what you get from other Darksiders games is present here. Like upgradeable skills and the kind of level exploration the other titles have.

But it may feel more different than it is simply because of the camera angle. Rest assured though. This is a Darksiders game through and through and most fans of the series should love it.

Rounding out this list is Disco Elysium – The Final Cut, a highly narrative driven RPG that is entirely devoid of combat. There are still encounters, but you aren’t really battling anyone like you would in any other RPG game.

Instead, you have events that you encounter and which can be considered accomplished by having the right skills and choosing the right dialogue options. If that’s not your cup of tea, we totally understand. But we think you might be doing yourself a disservice by not checking it out.

This is perhaps one RPG that no one should skip if they love the story aspects of role playing games. Because there’s a lot of narrative here and most if not all of it is excellent storytelling. Making it one of the best RPG games on the Steam Deck.

The post The Best RPG Games For The Steam Deck – January 2023 appeared first on Android Headlines.